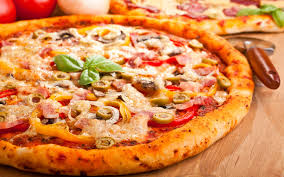 • Metro Pizza. Now with six locations in Las Vegas, including one inside Ellis Island Casino, this local favorite has won several awards for its pizza, but the laid-back atmosphere is also appreciated.

The business philosophy is that a true pizzeria should be a gathering place for people to relax, share great food and enjoy each other’s company, and Metro Pizza executes this mission very well.

• Five50. Located in Aria, Five50 is one of the newer pizzerias on the Vegas scene. This venture by chef Shawn McClain features several creative pies, including the forager, which has a balance of salty, earthy and sweet flavors, and the blanca pizza. The beer and wine selections are also carefully chosen.

Visitors who sit to enjoy a meal are treated to an innovative design space; those up late can grab a slice from the counter into the early hours of the morning.

• The Pizzeria. Better known as Secret Pizza, the Pizzeria at the Cosmopolitan isn’t much of a secret anymore. Located on the top floor of the resort and down a long hall plastered with album covers, this out-of-the-way eatery is funky enough as it is, but it’s made all the much better by stellar pie.

The dough is made fresh daily, and the toppings are basic but flavorful. And, for just a few bucks per slice, this is one of the best deals on the Strip.

• Rocco’s Deli. There are a few pizza imposters called Rocco’s throughout the city, but the real deal can be found at 1181 S. Buffalo Drive.

Opened in 1999, this family-owned deli has a simple philosophy: Keep it honest and fresh. Everything is made from scratch, all the way down to the bread crumbs. Rocco’s house white and meat lover’s pizzas are the most popular pies on the menu.